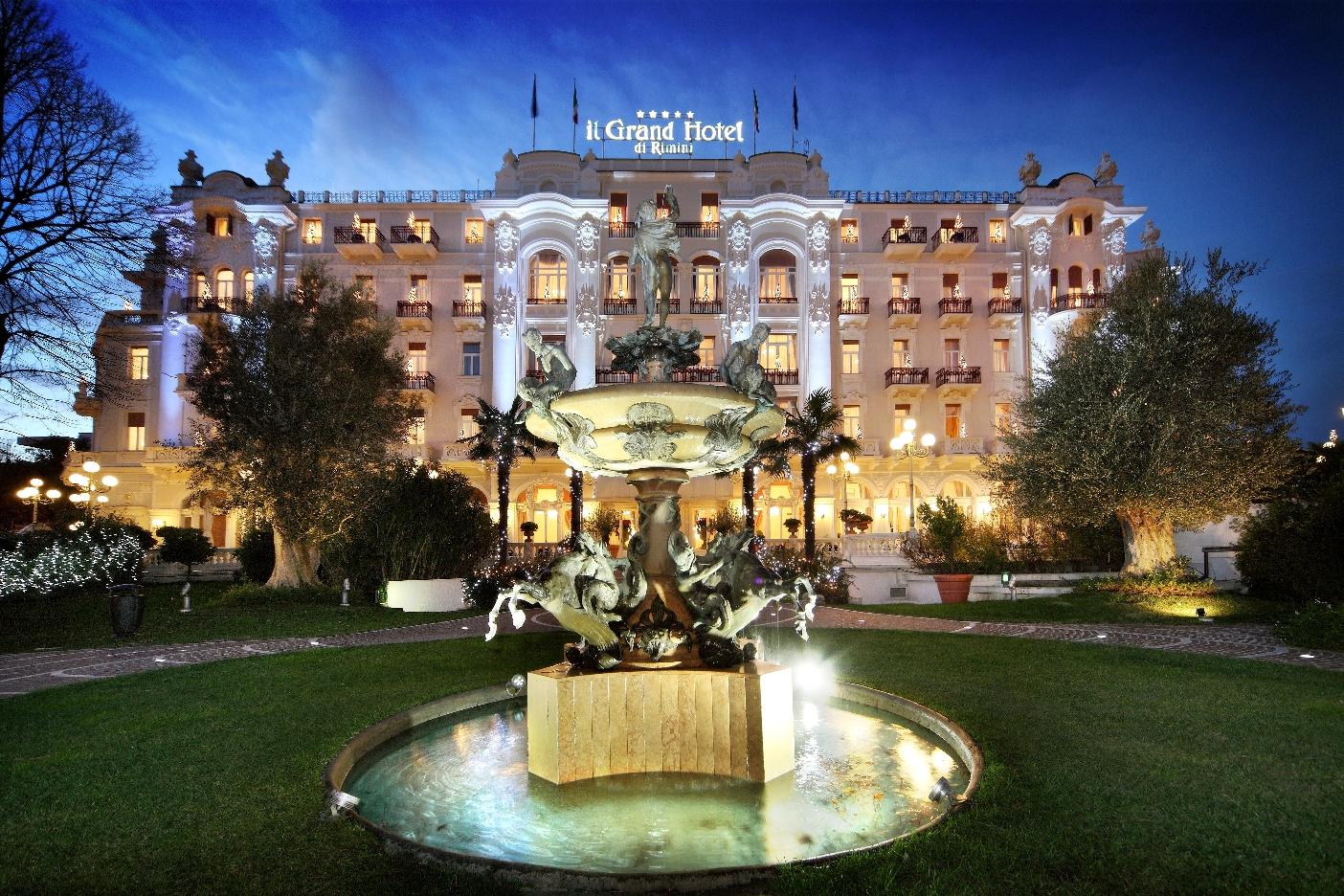 The Grand Hotel of Rimini, five-star luxury hotel, long considered the symbol of La Dolce Vita on the Adriatic Riviera, is an astonishing historical residence that proudly displays a fascination of over a hundred years of lifetime. It is part of the BATANI SELECT HOTELS Group
Today its legendary terrace just like the majestic park that surrounds the hotel grounds or the private beach on its seafront, hosts concerts, summertime dinners, cocktails, wedding banquets, parties and numerous events that blend originality and refined tastes, a gastronomic proposal of absolute excellence… in a magical atmosphere. Wonderful proposals of the highest quality for an exclusive holiday or for a business meeting.

The chef Claudio Di Bernardo and his team propose an enormous variety of traditional recipes – both seafood and meat, revised with a modern touch – in two different environments: the restaurant “La Dolce Vita” – which occupies the antique salons of the hotel, and opens out in summertime onto the magnificent terrace – and the smaller beach restaurant “La Dolce Vita al Mare” for aperitifs and parties, and also romantic summer dinners on the water’s edge.

The Grand Hotel Rimini is at just 10 minutes by car from the Misano World Circuit and at just one kilometer from the historic town centre, heartland of designer shopping, exciting nightlife, art and culture.

This website uses cookies to improve your experience while you navigate through the website. Out of these, the cookies that are categorized as necessary are stored on your browser as they are essential for the working of basic functionalities of the website. We also use third-party cookies that help us analyze and understand how you use this website. These cookies will be stored in your browser only with your consent. You also have the option to opt-out of these cookies. But opting out of some of these cookies may affect your browsing experience.
Necessary Always Enabled
Necessary cookies are absolutely essential for the website to function properly. This category only includes cookies that ensures basic functionalities and security features of the website. These cookies do not store any personal information.
Non-necessary
Any cookies that may not be particularly necessary for the website to function and is used specifically to collect user personal data via analytics, ads, other embedded contents are termed as non-necessary cookies. It is mandatory to procure user consent prior to running these cookies on your website.
SAVE & ACCEPT