The story of the Circuit

The Misano motor racing circuit was designed in 1969 (3,488 m) and has always been under private management. Sports activities began after three years. At the sides of the track, small open pits and a building used exclusively to house racetrack offices..
The beginning of the 1990s saw the launching of a renovation project which over successive phases guaranteed the availability of an increasingly efficient facility.

The first expansion project dates to 1993: the track was lengthened to 4,060 metres, making it possible to use two track configurations, a long and a short one; a building was also erected with new garages, technical rooms, reception rooms and a large pressroom of around 600 sq. m.
In 1996 and 1997, a second stage of work was carried out to complete the building and the pits. In 1998 the paddock area was extended to a total of 40,000 sq. m.
Construction of the 1st set of stands, with a seating capacity of 5000, was completed in 2001.

In 2005 the circuit launched a radical renovation and modernisation project. A new main entrance was inaugurated, followed in 2006 by the new medical centre, an area of 300 sq. m. which ideally represents the circuit’s historical and scrupulous attention to safety issues.
At the end of 2006 the circuit was closed to permit the construction of a new even safer and more beautiful track, capable of hosting major world motor sports events.
In record-breaking time, only five months, radical work was carried out not only on the track, which was lengthened to 4,180 m with a reversal in the direction of travel (now clockwise), but also on structural parts. There are now four entrances to the circuit, the seating capacity of the stands increased to over 23,000 and the pressroom was renovated and expanded to accommodate 320 workstations. At the end of this impressive modernisation process the circuit also changed its name, becoming the ‘Misano World Circuit’.

At the beginning of 2008 one last change: a new pit lane was realized having a length of 250 metres running parallel to the track just after the first “curva del rio” and the track entrance. Due to this modification the “rio chicane” became more marked.
The track length is now 4226 metres and thanks to this last change Misano World Circuit is now even more spectacular as the new chicane now gives new possibilities to cars and bikes to overtake. In 2008 a new grandstand named Brutapela hosting 3000 seats was realized at the end of the straight. At the beginning of 2009 new works have been carried out to offer higher comfort to Misano World Circuit: Grandstand C with its 3500 seats, located at the spectacular exit of the Carro corners, turned into a covered Grandstand. Now Misano World Circuit offers a total capacity of 75,000 places 26,000 out of which are in Grandstands.
The artificial lighting system also underwent radical modernisation: 17 generator-equipped light towers were erected. The circuit thus consolidated another of its unique features: the possibility to run competitions at night.
All of the structural upgrades of the facility have been accompanied with an innovative technological investment as regards the total wiring of the circuit and Wi-Fi coverage for Internet connections over the entire area of around four square km. An investment made possible thanks to the partnership with Cisco, a world leader in the supply of network solutions. At that time only two circuits in the world could boast such technology: the Misano World Circuit and Motegi racetrack in Japan. The Misano World Circuit chose to adopt Cisco technologies, thus creating new opportunities to enhance the experience of spectators, further improve the safety system of the circuit and offer new multimedia services.
A new race control room with a system based on digital recorders has also been set up; the pit building is completely wired; the whole area occupied by the Misano World Circuit now has Wi-Fi coverage;

At the beginning of 2011, two more innovation projects were completed to further enrich Misano World Circuit. The Medical Centre, which has always been the pride of the structure, has been transformed into a health centre open to all, not just the sportsmen present at the circuit.
In addition, the company owner of the circuit has invested in clean energy and has built, on top of the stand covers, an ultra-modern 440 kWp photovoltaic system which, thanks to the sun, will produce over 450 kW of electrical energy with zero emissions.
Misano World Circuit is the only circuit in Italy and one of the few in the world hosting the two most prestigious motorcycle world championships. 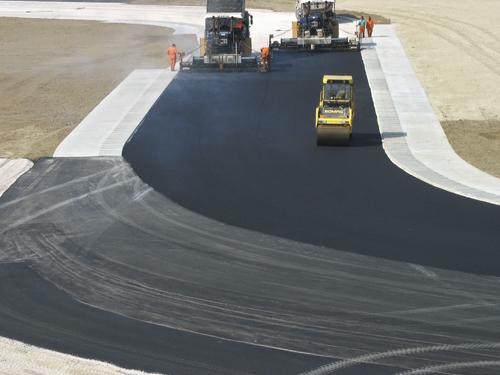